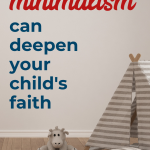 Of the 9 worship styles for kids, a child that leans toward the ascetic lifestyle is likely a very thoughtful child, and may not be interested in sensory ways of engaging with God and the Bible. You could also think of this child as the minimalist.

But when natural ascetics live a life of astounding simplicity, generosity, and sacrifice, the world can change for the better!

Watch the movie or read the transcript (plus a few extra ideas) below for an astounding example of a famous ascetic Christian who changed the world.

Eventually, my husband gave me a very gentle head shake. No. So I released him from participating, and his little face brightened. He watched keenly, but had no desire to wash or be washed.

Here’s why I didn’t force him

What would have happened if I had forced him to participate? He would have resented the experience and the teaching, and would be more reluctant to join anything in the future.

I have always approached this child’s faith almost like I would approach a wild animal – with caution and with great gentleness and patience. I do this because he becomes very skittish around the sensory activities that my other boys love.

Here’s what an ascetic lifestyle looks like in a child

The ascetic spiritual temperament is one that is deeply undervalued by our culture. The ascetic values silence, solitude, and lack of sensory stimulation. That is essentially the opposite of our culture of distractedness and noise!

Whereas a Sensate child loves to touch and hear and see beauty, the Ascetic child finds it painful or annoying, and it pulls her away from God instead of toward him.

An ascetic child will be a child that has no problem with being alone, or being quiet. In fact, they might get distracted by lots of sensory input or become frustrated by noise. This child might also be very obedient, to the point where he creates strict rules for himself to follow.

An ascetic child values simplicity and discipline as they learn to worship and connect with God.

An ascetic child values simplicity and discipline as they learn to worship and connect with God.

To help with this, you could create a place in your home where your child can go to pray. This is similar to the movie “War Room” where the main character creates a room just for prayer. An ascetic will probably prefer a space that is undecorated, but you can leave the details up to your child. Here’s an example of a kids war room.

Depending on your church, your child may find that there’s sensory overload in a service or in your children’s ministries. You can work with your child to make it a worshipful experience by letting him choose his own clothes in the morning, minimizing sensory input on the way to church, and even providing noise-cancelling headphones or earmuffs in church. I have seen kids do this before, and if it helps, go for it!

Helping your ascetic child love others

The ancient ascetic spiritual disciplines are fasting, celibacy, poverty, and silence, which can be hard to share with a child. But it is possible to share at least a few of these through simple activities.

An obvious time of year to integrate ascetic practices is during Lent. Here are some simple ideas you can use during the next Lenten season.

I have a book recommendation for you that will encourage your ascetic child, but before I tell you what it is, I want to tell you a story.

This famous ascetic changed the world

Nicholas was born to very wealthy parents. He fell in love with God at an early age and dedicated his life to God. He lived as a monk for a while, which is a very ascetic lifestyle.

Monks take vows of poverty and celibacy, and Nicholas wanted those things. He didn’t want to be rich.

Unfortunately for him, his parents died and left him a lot of money. But he didn’t want it, so he gave away his money to the poor. Not only did he give away his money and possessions to the needy, but he did it in secret.

Later, Nicholas would become the bishop of his city, a very important man who was fully devoted to God and to serving the poor.

Even though Nicholas lived almost 1700 years ago, we remember him every year, but now he’s called St. Nicholas.

St. Nicholas, sometimes known as Santa Claus, is a great reminder that we can live a dedicated ascetic life and be a huge blessing to those around us.

You can find a lot of kids books about St. Nicholas but one that feels most true to the real story is “The Story of St. Nicholas” by Cheryl Odden, published by the Voice of the Martyrs.

You can ask your local Christian bookstore to bring in “The Story of St. Nicholas”, or you can snag it here on Amazon.

This article was specifically about the Ascetic worship style and seeing God through quietness and sacrifice, but did you know there are actually 9 worship styles for kids?

I have a downloadable quiz that you can take which will help you determine which of the 9 worship styles your child leans toward. Take the quiz here.

Other Sacred Pathways for Kids

An overview of the Sacred Pathways