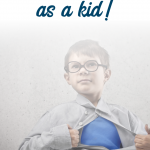 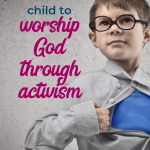 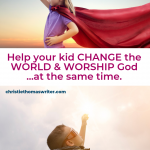 Of the 9 worship styles for kids, a child that leans toward the activist style is one with a very strong sense of justice. They might become frustrated by unfairness on the playground or at the dinner table.

How can you help your justice-minded child to connect with God through standing up for justice?

My son came home in a huff one day. According to him, all the other classes at school had the chance to play drums in music class, but his class only got to play the ukulele.

He was furious over the injustice of it all. The icing on the cake of frustration came when he told his teacher he was interested in playing drums, and she simply said, “no.”

My justice-minded child couldn’t handle this. I assured him that there was more to the story than what he had seen, but to him, it was just unfair. He wanted to stand up for fairness.

Equal drumming for all!

Some kids aren’t afraid to stand up for what’s right and don’t mind being alone in an argument. An activist child might even pick fights, which probably drives you crazy!

But it’s possible to help your activist child fight less for himself and turn that passion for justice toward helping people who truly need it.

Activism is more than just talking about injustice

Did your mother ever tell you to eat all the food on your plate, because there were kids in Africa who were starving? ?

While harassing our kids to eat their dinner isn’t going to help those who are starving, there are ways to help our kids see beyond their little world.

Since my boys were very little, we have often talked about how other children in the world have much less than them. But more than just pointing out that they are very privileged, we also have invited them to do something about it.

The boy who fought his music teacher has been the one to get the most excited about this, to the point where he created his own organization. He called it, “Creative Kids for Compassion.” Together, we spent a summer fundraising for water collection systems that are installed by Compassion International.

My son has a soft heart toward those who have no access to clean water, and has talked about it many times. But engaging the activist part of our children isn’t just about talking about unfairness. It’s about helping them do something about it.

We do this prayerfully, because that’s what is going to help our kids actually connect with God while standing up for others. It’s not one or the other – they work together for the activist child.

How to Help the World as a Kid

Based on our experience, here are the four keys to learning how to help the world as a kid:

Two fantastic picture books on the topic are from the Called and Courageous Girls series.

While both of these books are about female Bible characters, that doesn’t meant that they’re just for girls!

Both stories speak equally well to boys and girls. In fact, I believe our boys need more stories like this to remind them that God calls boys and girls equally to stand up for justice. Our sons and daughters need to learn that they can, and should, stand shoulder to shoulder in the fight against injustice.

You can ask your local Christian bookstore to bring in the Called and Courageous book series, or you can nab them from Amazon here:

This article was specifically about the Intellectual worship style and seeing God through nature, but did you know there are actually 9 worship styles for kids?

I have a downloadable quiz that you can take which will help you determine which of the 9 worship styles your child leans toward. Take the quiz here.

Other Sacred Pathways for Kids

An overview of the Sacred Pathways