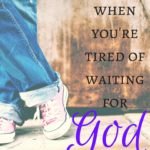 Burning tears of frustration and disappointment slipped down his cheeks as he lay prostrate on the couch. His small hand covered his eyes as he wept about the injustice of it all.

How dare I, his mother, tell him that he couldn’t ride his bike? He knew the possible consequences, but he pleaded so passionately: “I just KNOW I won’t slip!”

It was February, and the sidewalks were a skating rink. Frankly, his timing was terrible. But in his 4-year old mind, he knew better. He KNEW he wouldn’t slip. He KNEW it was the best possible time to ride his bike because it was in his mind and heart NOW.

30 minutes later he was still weeping about the tragedy.

I definitely act the same way at times

I weep, we beg, I pray for God to give me an opportunity. When it doesn’t pan out I weep in frustration and disappointment and doubt his goodness. But just like I didn’t allow the ice-riding for good reasons, often God has better plans or better timing for me. It may not seem so at the time though; in fact, we may never understand why.

Abraham and Sarah had to wait years for the fulfillment of God’s promise of an heir, and in the time of waiting they both took matters into their own hands, making many mistakes along the way.

But God burst forth in power
at the very moment when the timing of the child’s birth
would take their breath away with its absurd perfection.

The Israelites waited 400 years in slavery for God to free them, and in the time of waiting there were generations of Hebrews that lived and died without seeing the end. (Think about the time frame here: 400 years ago everyone still believed the sun moved around the earth and Galielo was being forced to recant heliocentrism – a lot happens in 400 years!)

But God burst forth in power
at the very moment when a palace-raised leader
could intercede for the Hebrews
in front of someone who might take him seriously.

The same Israelites had to wait another 40 years before entering the Promised Land, and in the time of waiting an entire generation died.

But God burst forth in power everyday during those 40 years,
proving that he would provide,
and turning them into a nation with beliefs, armies, and cohesion.

Humanity waited millennia for God to come down and rescue us from sin. Generations, centuries, people oceans away from the middle east, they waited and still wait, seemingly in vain.

But in the time of waiting,
in the times when it seems most like he has forgotten us,
he is weaving a complex tapestry,
an incredibly detailed piece of art
that will bring glory to his Name.

While the Jews were being conquered and ruled by Greeks and Romans and a smattering of other empires, the Mediterranean world was becoming smaller: highways were being built, trade routes were being established, and certain languages were becoming fairly universal. These modernizations all made it possible for the gospel to spread like wildfire once the Messiah finally came on the scene.

And in that time of intense longing
of O come O come Emmanuel
of all creation groaning
God burst forth in powerful weakness
proving that he sees, hears, touches, thinks, and loves
and that as humans we are not abandoned in our sin and shame
and that he has come to bring us home.

Are you tired of waiting on God?

Maybe you’re waiting for the ice to go away so you can go ride your bike, or perhaps you’re waiting for something deeper…
…a disease to be healed
…a relationship to be made right
…a home for your family
…a business to become profitable
…a prodigal child to come home

This plan that God is weaving, the one that brings glory to his Name? It includes you – not as a pawn, but as an incredible design all your own. Though you may never see his full tapestry for the glory that it is, you are loved.

And at a time predestined since the beginning of the world,
he will burst forth in power,
proving that he sees you, hears you, thinks about you, and loves you
and that as his child you are not abandoned in your waiting
but that he longs to bring you home.

It may feel like crying out in the dark, but El Shama, The God Who Hears, hears you.