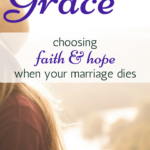 This is a guest post by Tara, a friend from my women’s Bible study. As I’ve gotten to know her, I have been so amazed at how God is still so real to her, even though he didn’t answer what was probably the biggest prayer request of her life. Welcome Tara!

“For as long as we both shall live” ……a promise made, filled with hope, dreams, a lifetime of memories waiting to be made.  In that moment you promise a lifetime together.

In another, unexpected moment…..a promise is broken, hope becomes despair, dreams are shattered and memories made become washed in pain.

The memories of the night I learned that my husband of 8 years was going out with another woman are still vivid in my mind, although they no longer hurt.  God gave me an overwhelming sense that not all was right regarding what my husband told me about his plans for that evening.  Incredibly uneasy, I actually searched my husband’s coat pockets (something I had never done before) and found notes he was writing to her.

Heartbroken, desperate, and fearful, I called his friend and of course he was not with my husband, so I called my husband and caught him in the first of many lies and deceptions.

Desperation, fear and even shame ruled my days. God had given me a friend many years earlier. I walked alongside her when she and her husband separated and celebrated with them when he returned home. She knew my pain, my fear, my shame, and my hope.

She was my encourager and was the one who pushed me out of despair.  She alone knew what I was going through and what I needed.  She was able to give voice to the many scared and lonely thoughts for which I did not even have words.

The day my husband left was truly gut-wrenching.

Lost, confused and alone I went to another friend’s home. She was expecting her third baby in the next week but welcomed me into her home. Another friend delivered some much-needed chocolate and together we sat, staying up late, and God held me through my friends.

I stayed there that night, not wanting to go home. In my bed, I spoke with my Father and just asked if I could talk to Him until I fell asleep. Over the next two and a half years that is how I went to sleep.

When I looked back, I realized, remarkably, I never had a sleepless night.

At times I needed Him most, God would deliver!

Godly friends were my lifeline, praying for me when I had no words to pray and loving me with their time and patience as they allowed me to go through a painful process.

Other times God arrived in a message of hope from someone at church,
a hug from someone who saw grief and pain and didn’t shy away even though they didn’t know me or my situation,
words from scripture to remind me I was loved,
honest words from a pastor that didn’t try and fix my marriage or heal my hurt….
just “ I am so sorry for what you are going through.”

Even a devotional that when I read it in the morning about God not seeming to be your friend. It made no sense to me until that evening when I received a phone call from another woman’s husband and learned about yet another relationship my husband was involved in. I knew then that God had been preparing me for this earlier that day.

There was a history of divorce in both of my parents’ families including my own parents.  I was determined not to follow suit!

Through 2 1/2 years of separation I believed God could and would restore our marriage.

We would be one of the couples that made it and go on to support other couples in difficult times in their marriage. I had it all planned out. I remained faithful and determined. God had much to teach me about leaning on Him and trusting Him when He did not seem there.

I waited. I prayed. I hoped. I believed. I asked.

I received, but not what I expected.

But I did not receive a restored marriage.

God had another task for me; as a follower of Christ, I had to wrestle with my strongly held value that marriage was for a lifetime and my belief that marriages that failed where because the couple did not try enough. I know that God hates divorce, but I was now the one who would have to make that decision. God gave me a counsellor who understood that struggle and counselled me through it with Scripture. I made the decision to file for divorce.

I also now saw with God’s heart that broken marriages aren’t always about two people who just gave up without trying.

While waiting for my first meeting with my lawyer, I saw a woman who was clearly angry and bitter, and I decided right then I would not become that person. I had another choice to make and that was to honour God and my husband throughout the divorce. I was not perfect in this and had times of hurt and anger but eventually, I was able to fully forgive my husband.

Shortly after that first meeting, I learned that my husband was in another relationship and was hoping to move in with his girlfriend. For me, I believe God was confirming my decision to file for divorce. I had to take action first and then He gave me more information. When I called to speak with my husband about filing for divorce, I was able to tell him I wanted him to be happy and I hoped that he could be with this person. I was released from my marriage.

At that time I did not know what the future held for me. It didn’t matter because any trials I faced, God would be before me and would provide to me what I needed in His time. They are words I still need to remind myself of, but a promise I can rest in.

In one unexpected moment the promise of a lifetime ended with “I don’t love you anymore”.

In many moments and promises kept, God showed me and told me over and over again “I love you…always!”

Tara lives with her husband Clint and their two children. Their family has truly been an opportunity to live out their wedding vow, “I dare to dream again.”  She earned her degree in Occupational Therapy in 1996 and still practices on a part-time basis.  The challenges of parenting have reminded her regularly of how much we need God’s grace daily in our lives and she strives to show that to her family.  Tara has a goal to read one book (of her choosing) per year.  She enjoys family walks and bike rides, equestrian riding and dragon boating, an activity she now enjoys with her husband.  Tara’s life is able to bear witness to Psalm 125:6, “Those who sow in tears will reap in joy!” 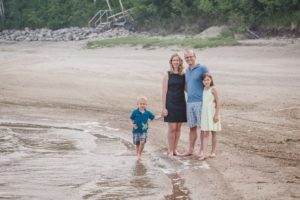 Photo by Chad Madden on Unsplash

You may also like the rest of the Defined by Grace series: 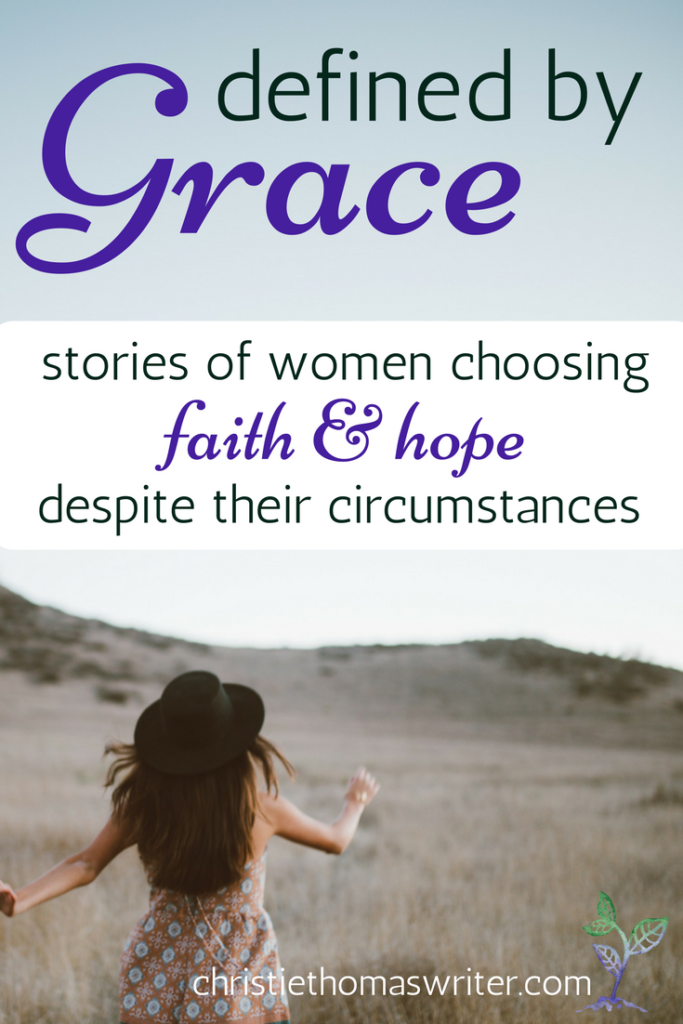 Photo by Chad Madden on Unsplash