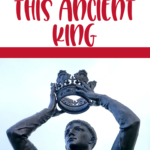 King Asa was a rock star.

He got rid of most of the idolatry in Judah. He built up and protected towns. And when he was attacked by an army much larger than his own, he prayed a powerful prayer to which God responded with a BANG. (as in a “bang your enemies are annihilated!”)

He must have been a powerful leader because this was a true revival, not a half-hearted hurrah.

“They took an oath to the LORD with loud acclamation, with shouting and with trumpets and horns. All Judah rejoiced about the oath because they had sworn it wholeheartedly. They sought God eagerly, and he was found by them.” (2 Chronicles 15:14, 15 NIV)

He sent away the idolatrous queen mother and lived in peace for most of his reign.

…twenty-one years later, he was faced with another military threat. He did something that appeared to be wise and even worked to contain the threat.

(You’ll have to read 2 Chronicles 16 if you want to know what it was!)

But a little while later he received a visit from a prophet who told him that he had made a mistake in relying on people instead of on God.

Asa got so ticked at this rebuke that he threw the messenger in prison! Then, three years later, he got inflicted with an illness. And he forgot God again.

“Though his disease was severe, even in his illness he did not seek help from the LORD, but only from the physicians.” (2 Chronicles 16:12 NIV)

How did this happen?

How does someone go from starting a revival all across a nation to forgetting completely about God?

I think I know how it happened. He got comfortable. He lived in peace for so long, that he forgot about God.

Remind you of anyone?

When we first meet God, he is real and active in our lives.

We seek him and he is found.

We can tell he’s listening.

He continues to listen, but for many of us, our prayers go from “powerful and effective” to “weak and ineffective”. We pray only about ourselves. We turn inward. We forget where all our blessings originated.

Then we forget him. We talk to our friends and our family about problems and forget to talk to God about them. We become ill in body, soul, and spirit, and forget that he cares about all aspects of our lives.

Last night I was going over my lesson for today’s Sunday School class, and I was convicted about something. I have a really great routine for reading/listening to the Bible when I’m home alone with the boys, but as soon as a weekend rolls around, or anytime my teacher husband is home, my routine goes out the window and I usually completely forget about spending time with God.

RELATED: Why we all need to read the Bible (and how to get started)

I’ve been frustrated about this before, but this time I really felt that God was reminding me that this lackadaisical attitude wasn’t ok with him either. Then this afternoon when I listened to this story of Asa, it really resonated with me.

I had been passionate and now was lukewarm. I had forgotten about my God. And it was showing. I have been tired, cranky, and distracted, and now I know why…b I wasn’t having my heart strengthened daily.

But with God’s help, that is going to change today.

“The eyes of the LORD range throughout the earth to strengthen those whose hearts are fully committed to him” (2 Chronicles 16:9 NIV)

Take my 40-day email challenge, “40 Days with Jesus” and draw closer to Jesus in ways you never imagined.