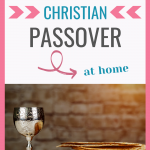 I sat in my scratchy nylons at a long wooden table. All the other 12-year-olds from my Sunday School class sat in similar plastic chairs along the table.

Together, we dipped a green vegetable into a bowl of salt water and scowled as we briefly tasted it. We winced at the bitterness of horseradish and secretly took an extra scoop of the apple/nut mixture.

We raised our glasses of grape juice and broke the flatbread as one.

And then, I forgot all about it.

It was my first glimpse of a Jewish Passover celebration, but because I didn’t see the connection to my Christian faith, it was buried deep in my memories.

Those memories resurfaced a few years ago as I did research on the Passover meal and its deep, metaphorical connections to what Jesus did on the cross and the Messianic Passover meal has now become an important part of our family’s Holy Week celebration.

Matthew, Mark and Luke all refer to the “last supper” as a Passover meal.

Then came the day of Unleavened Bread on which the Passover lamb had to be sacrificed.

John, however, says that this meal took place “just before the Passover festival” (John 13:1 NIV) and actually sets up the story so Jesus himself is sacrificed the same day as the Passover lambs, drawing a clear connection between the original Passover and Jesus, our Passover lamb.

A note in my Cultural Backgrounds Study Bible notes that the synoptic gospels and John seem to be in conflict as to when the Passover actually took place. Here are two suggestions as to why they’re different:

Jesus held a Passover meal with his disciples one evening early, whether because he would be dead by the next evening or because they followed an existing sectarian calendar…

Others suggest that John is more interested in narrative symbolism than are the Synoptics, and thus skips Jesus’ symbolic interpretation about Passover and narrates Jesus’s death directly as the Passover lamb.

It seems clear that Jesus did indeed intend for his last meal to be a Passover meal, with all its rich symbolism.

What exactly is that symbolism, you ask? Let’s talk about that.

*I’ve changed this article up from its original form because I’ve discovered the full Seder meal as celebrated by modern Jews didn’t exist at the time of Jesus. Jesus’ Passover was more of a proto-Seder with elements of the current Seder but not all of them. “Seder” basically refers to the liturgy of eating the foods in a specific order, along with specific questions and answers. This wasn’t created until AFTER the destruction of the temple in 70AD, because up until that point, Passover was quite a different celebration. When it moved from temple-focused to home-focused, the Seder and Haggadah were created.

In addition, I’ve also learned that Christians celebrating a Passover Seder meal (with all the modern elements) is quite offensive to many Jewish people, who have spent 2000 years being persecuted by Christians, only to now have one of their holidays co-opted by us. This is a great article explaining the trouble and encouraging Christians to seek out Jewish-led Passover meals rather than hosting them ourselves.

On the other hand, I know Messianic Jewish people who believe ALL Christians (of both Gentile and Jewish descent) ought to be celebrating the Biblical feasts because they feel that gentile Christians have been grafted into the family of God through belief in Jesus. You can read more about that here and here.

I share this because I believe Jesus would want us to approach this with sensitivity toward his brothers and sisters, not coming in like overbearing peeping toms but with gentleness and humility.

With that in mind, read on to discover the elements of the Passover meal as Jesus celebrated it, and what they represent:

There are 4 specific cups of wine (or juice) to partake of during the Seder meal. While not specifically mentioned in any Haggadah (Passover script) I found, it seems that the red wine/grape juice represents the blood of the lamb.

In the famous “This cup is the new covenant in my blood,” statement (Luke 22:20 NIV), Jesus is referring to the third cup of wine.

The Israelites were told to be prepared to flee Egpyt, so they had to eat the first Passover meal standing up. Because they didn’t have time to add yeast to their bread and let it rise, the unleavened bread normally eaten at Passover is more like a cracker.

The first Passover lamb died and had its blood placed on the doorframes as a substitute sacrifice for the firstborn son. Each family took their Passover lamb to the temple to be sacrificed and roasted that night.

4. GREEN VEGETABLE* (parsley, celery, or sometimes even a potato).

The parsley represents new life, and can also represent the hyssop that the Israelites used to paint the original Passover lamb’s blood on their doorways. We dip the green veggie in SALTWATER as a reminder of the salty tears the Israelites shed in slavery.

*This may not have been part of the Passover celebration at the time of Jesus and is not mentioned in the “Last Supper” passages.

Horseradish! This represents the bitterness of slavery.

Traditionally, this is mixture of nuts and apples. It symbolizes the bricks that the Israelites needed to build out of mud when they were slaves in Egypt.

*This also may not have been in the Passover in Jesus’ day. It’s not mentioned in the Bible.

For a wonderful summary of what the elements meant to Jesus’ disciples during that fateful Passover meal, watch this interview!

How To Do A Messianic Passover Meal At Home

Edited: I used to have a step-by-step guide on this post, but as I’ve mentioned above, I now feel strongly that as a non-Jewish Christian, I need to be pointing you toward those who have been celebrating the Passover as part of their identity for thousands of years: the Jewish people.

If you have a Messianic Jewish congregation in your city, I encourage you to learn from them or ask if you can participate in their Seder meal. A Messianic Seder takes the elements of a traditional Jewish Passover Seder meal and re-interprets them in view of Jesus’s life and death. For example, a Messianic Seder connects the original Passover lamb to Jesus.

In addition, Jews for Jesus has hosted an online, Messianic Seder meal that everyone was invited to participate in. Our family followed it this year and it was very meaningful.

If your family would like to learn more about the Passover meal, I HIGHLY recommend my friend Sarah Ruth’s family activity guide! It has picture book recommendations and several days of fun learning activities, recipes, and a Seder meal Haggadah. (Sarah Ruth is actually a Messianic Jew, so you’ll be getting your teaching more firsthand than me, who is not Jewish.)

If you have any other questions, please feel free to contact me or leave a comment. Let me leave you with a final word, as written by the Apostle Paul:

“Christ, our Passover Lamb, has been sacrificed for us.” 1 Corinthians 5:7 NLT