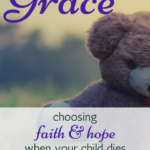 Today’s story comes from my friend Michele. As I’ve gotten to know her I have been amazed at her courage to continue trusting God in the midst of the grief of a mother’s worst nightmare.

I became a mother on February 24, 2004 as my husband and I welcomed our first son into the world. We named him Nathaniel Caleb and we loved him so very much.

Our son, a gift from God, given to us.

We loved hanging out as a family and spending time with our little guy. We took him camping and swimming, we read him books and taught him about Jesus. We went for walks and played with blocks, we played outside and played in the snow. We hugged, we laughed, we kissed and we loved. Our lives were blessed as we watched him grow.

It was when Nathaniel was about eleven months old when we first saw some signs that things were not right with him.

It started off with him refusing to eat and then throwing up everything he did eat. We thought he had the flu, but when this went on longer than it should have and got worse instead of better we took him to see the doctor. They ran test after test to try to figure out what was wrong with him.

An abdominal ultrasound finally revealed that there was a tumor on Nathanielʼs adrenal gland. We were told we needed to head straight to the hospital so they could run more tests to find out exactly what they were dealing with.

After we got to the hospital, Nathaniel really started to go downhill. His breathing became labored and he was so dehydrated that they couldnʼt get an IV started. They tried for hours. The doctors finally said they would need to sedate him in order to put the IV in.

Nathaniel never came back to us from that procedure.

He passed from this earth to heaven on March 18, 2005 at the age of thirteen months. We have missed him ever since.

What does it mean to be defined by grace rather than being defined by this tragedy?

How do I live a life defined by grace especially in light of losing a son?

How do I even carry on?

The answer for me lies in a complete surrendering to God.

Itʼs a decision to allow God to move and work in our lives.
Itʼs choosing to trust God even when the circumstances of life are not what we expect or even want.
Itʼs a surrendering to the God who entered this broken world to die for us so that we might be redeemed.
Itʼs giving God full access to our lives and allowing his grace to wash over us.
Itʼs recognizing that his love is enough to get us through anything life throws at us.

As Nathaniel lay dying in the hospital I remember praying that God would heal his body, that he would bring our Nathaniel back to us.

I prayed he could be saved from death; he was too young to go. He had too much life yet to live. I believed with all my heart that God could perform a miracle and restore him back to health and I was asking him to do so.

God could have, but for whatever reason God said “no” to Nathanielʼs physical healing on this earth.

As I watched the doctors and nurses trying to resuscitate Nathaniel, I knew he was not going to make it. Standing in that pediatric ICU room there was a decision that needed to be made. What would I do with this? Would I still trust God even though Nathaniel would not come through? Could I trust God with even this? As I continued to pray, something inside of me caused me to pray differently.

I was no longer praying for healing, but I was praying, “Lord, if he isnʼt going to make it, then you have to get me through because I canʼt do it without you.”

I truly believe this was my moment of complete surrender. A moment of being defined by grace. God was asking me to trust him, to trust that even without my son he would be sufficient for me.

The moment I gave up control God moved in such a huge way. I had never experienced God like that before in my life. I felt an overwhelming sense of his love. My God moved to show me who he is.

His grace allowed me to whisper to Nathaniel, “go home baby.”

I believe I could never have walked this journey without God. His grace flooded me not only in the hospital room that night, but also in the days, weeks and months to come. I clung to his promises in the Bible and felt a peace like never before. A peace that the Bible describes as one that passes all understanding.

And it is just that; itʼs hard to explain that tender place of being held in the hands of Almighty God.

Donʼt get me wrong, life is hard and I still struggle with certain things about the loss of my son. This road of grief and loss is not an easy one, but I believe God was teaching me about him in that time.

Through the pain he has taught me that he is completely trustworthy and I believe he continues to show me more of himself and his love as I choose to be defined by grace and not my circumstances.

Often when we miscarry a baby or lose a child, there are other children in our family that grieve as well. Help you child learn to cope with loss through my free resource: NAVIGATE: Navigating loss and grief with children as well as my picture book, Quinn Says Goodbye.

Michele lives on an acreage with her husband Mike and three wonderful kids, Faith, Julia and Caleb. She enjoys spending time with her family, scrapbooking, taking photographs, arranging flowers, laughing and having fun! She’s a stay-at-home mom and loves mostly every minute of it!