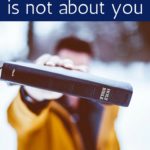 I grew up assuming the Bible was about me. I mean, my Sunday School teachers taught me that every Bible story had a personal life application, so I assumed that held true for every part of the Bible. And that included the really long lists of names in Numbers, the prophecies about all the nearby cultures that were depraved, the bit about long hair being a woman’s glory…all of it.

I spent years trying to fit “life application” on top of every word in the Bible.

Then, I spent the next decade trying to figure out what the Bible is actually about.

And I discovered something.

The Bible isn’t about me. It’s not about you either. (Hate to break it to you, but it’s true.)

Do you think Jeremiah had 21st century North Americans in mind when he was talking to the exiles? Nope. He didn’t even have 21st century Middle-easterners in mind.

Do you think Paul had 21st century Europeans in mind when he was writing to the Christians in Corinth? Nope. He didn’t even have 21st century Greeks in mind.

I bet every Biblical writer would be flabbergasted to think that their words had survived so long, and that so much of what they wrote had been twisted to fit a completely different cultural context in the name of “life application”.

Why is this a problem?

It’s a problem, because the hero of the Bible is not me and it’s not you. It’s God.

The Bible is first and foremost the story of God working through a specific people group (the Israelites), teaching them about Himself, and slowly, over centuries, guiding them to a greater understanding of Him.

When we try to twist it to make it all about ourselves, we usually take verses WAY out of context and end up with false theology.

EXHIBIT A: We take a verse like the Prayer of Jabez and think it means God wants to bless us financially and keep us from all pain. Um, I don’t see that in the greater testimony of Scripture. (And I don’t think the persecuted church does either.)

(Jabez cried out to the God of Israel, “Oh, that you would bless me and enlarge my territory!
Let your hand be with me, and keep me from harm so that I will be free from pain.”
And God granted his request. 1 Chronicles 4:10)

EXHIBIT B: We read a verse like Psalm 139:19 and take it literally: “If only you, God, would slay the wicked!” That has gone wrong on multiple occasions when we decided that this reflects God’s personality and we try to copy it. (Re: the Crusades, the Salem Witch Hunts, the Inquisition…)

The Bible was created by a series of people…inspired by God, but not dropped down on stone tablets from heaven.

(I thought it was like that for a long time. Like the writer would go into a trance and God would direct his quill on the scroll, basically like a ouija board. After learning A LOT more about Biblical scholarship, I have realized that God used people, but not like a ouija board. <—Disclaimer: I only know about these because of a couple random TV episodes. I have never used one.)

People wrote the books of the Bible, and these people lived in certain cultures and had very specific reasons for choosing to add certain facts and omit others.

If you prefer, you can word it like this: God inspired people to write the books of the Bible, and because these people lived in certain cultures, God had very specific reasons for inspiring them to add certain facts and omit others. The point is that God has always worked with and through humans beings, not in spite of them.

Not only that, but they wrote it down for a specific group of people, usually the ancient Israelites.

The Israelites weren’t a tribe of angels, but a group of people that lived very much like the rest of the ancient near east. They were tribal, violent, stole other people’s land and women, and worshipped practically everything but the true God. (Don’t believe me? Read the Old Testament…)

We have very little idea what their lives were like, but the original writers of the Bible did. These ancient people were the intended audience. This is called “cultural context” and it’s important!

But the difference between other literature from the Ancient Near East and our Bible is that it reveals who the TRUE God is. Slowly, generously, patiently, He revealed Himself over millennia to the people of Israel (and many others as well), and is revealing Himself still.

The Bible is about this incredible, box-busting God that can’t be pinned down.

The Bible is not about you. Or me. It’s about God.

And because it’s about God, who loves all of humanity (including you and me), you and I CAN learn a lot and find a lot of life application from Scripture. The Word of God is living and active, BUT not every word is directly about us.

(For an excellent case in point, read this article about the beloved Jeremiah 29:11)

So let’s stop looking for “life application”, and start looking for God. Let’s stop skipping a step, leaping right over God and straight to us.

The next time you’re doing a Bible study and are thinking to yourself, (or if you’re me, whining to yourself), “what does this say about ME?” ask yourself this question instead:

What does this say about God?

And as He answers that question, just watch how God is going to blow your mind with who He is, and how life application is going to naturally flow from this new understanding of who God is, rather than the other way around.

The Bible does have the ability to profoundly change our lives, but we can’t get there by asking ‘what’s in it for me?’ Or ‘what does this verse tell me to do’ or any variation of self-centred Biblical study.

When I put the focus back where it belongs by asking “what does this say about God?”, then my life is changed from the inside out.

EXHIBIT A: When I stop asking what the book of Jonah has to say to me (don’t run away from God…or at least learn to swim) and start asking “what does this say about God?” (his utter grace and forgiveness both for Jonah and for his enemy), then I can be transformed by the power of God’s forgiveness.

EXHIBIT B: When I stop asking what the rules for the building of the tabernacle mean for me (um, who cares about what kind of wood they used? This seems totally UNapplicable to my life) and start asking “what does this say about God?” (He loves beauty and true worship and sensory input and working through human beings/our physical bodies/experiences), then I can be transformed by Him because I realize how deeply He cares about the details.

If you’d like to experience the Bible in a fresh way, join me in a 40-day journey through the book of Mark. I’ll send out a daily email with the reading and include a few thought-provoking questions (including the one above), and sometimes a little devotional or some historical notes.

All the questions are open-ended and appropriate for conversation around the dinner table or for your own personal growth. Read it with your kids, read it alone, read it with a group. Just read it with me!

Click here or on the picture and join the movement of people who are thirsty for a fresh experience of God this season!