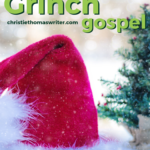 Understand the message of the Christian faith more deeply through the Grinch Gospel.

“How the Grinch Stole Christmas” is one of my favorite Christmas movies (and books) because it’s much deeper than meets the eye.

In fact, our communal friend has a lot more to teach about the gospel of salvation than you might think!

Through his story, we can see several of the crucial aspects of salvation all coming together in one hairy green epiphany.

“But wait,” you might ask, “isn’t salvation just a single moment?”

Salvation has many aspects, and it’s broken down quite clearly by Harry Reeder in his book “From Embers to a Flame”. (👈🏼 A great book for church leaders to read, by the way 😉)

Have you seen the Grinch movie? Our favorite is the new animated one, or the original cartoon version. If you haven’t seen it (or don’t have access to it), you can purchase the original book here.

No matter which version you like, our communal friend has a lot more to teach about the gospel of salvation than you might expect!

Though his story, we can see several of the crucial aspects of salvation all coming together in one hairy green epiphany.

Salvation includes all the following elements (list taken from Harry Reeder’s “From Embers to a Flame”).

1. Salvation from the persuasion of sin: CALLING

God calls to us throughout our lives. God’s calling gives us eyes to see and ears to hear his grace.

As the Grinch stands and listens to the Whos singing their joyful singing, his brain is confused by what he hears:

So he paused. And the Grinch put his hand to his ear.
And he did hear a sound rising over the snow.
It started in low. Then it started to grow.
But the sound wasn’t sad! Why, this sound sounded merry!
It couldn’t be so! But it WAS merry! VERY!
He stared down at Whoville! The Grinch popped his eyes!
Then he shook! What he saw was a shocking surprise!
Every Who down in Whoville, the tall and the small,
Was singing! Without any presents at all!
He HADN’T stopped Christmas from coming! IT CAME!
Somehow or other, it came just the same!
And the Grinch, with his grinch-feet ice-cold in the snow,
Stood puzzling and puzzling: “How could it be so?”
“It came with out ribbons! It came without tags!”
“It came without packages, boxes or bags!”
And he puzzled three hours, till his puzzler was sore.

Then he has an epiphany.

This process, this slow opening of the eyes and unstopping of the ears by God, is CALLING.

2. Salvation from the power of sin: REGENERATION

But I think that the most likely reason of all,
May have been that his heart was two sizes too small.

In the scientific realm, regeneration is the renewal of a body part, like a starfish growing new arms or a salamander growing a new tail. At the moment of salvation, our hearts, like the Grinch’s, become new.

And what happened then? Well…in Whoville they say,
the Grinch’s small heart grew three sizes that day!

No longer are we slaves to the power of sinful thoughts and actions, but are free to love God and appreciate his work in our lives.

That, my friend, is the power of true regeneration.

3. Salvation from the penalty of sin: JUSTIFICATION

When the Grinch comes down the mountain with his sleigh full of the Whos’ Christmas goodies, they don’t hold a grudge. He shows up with all the items he stole, but they don’t penalize him. He is given a new record.

4. Salvation from the position of sin: ADOPTION

Before salvation we were alienated from God, enemies of Him. Ephesians 2:3 calls us the children of wrath! At the moment of salvation we are adopted into His family as a precious daughter or son of the Most High King.  This means I am heir to His kingdom and promises.

Not only do they give the Grinch a clean record, but he is even brought into community of Whoville, occupying a place of high honour at the table. He is adopted into the Who family, just as we are adopted into God’s family, and suddenly find ourselves with many brothers and sisters in Christ.

And he, HE HIMSELF! The Grinch carved the roast beast!

5. Salvation from the practice of sin: SANCTIFICATION

As this point we have to depart from the official story of the Grinch and make a few assumptions about his future in Whoville. The Grinch is immediately welcomed into the family of Whos with his new heart and blank slate. But he will probably find it difficult at first to live like them. He will have moments when where his chest will tighten and will he will wonder why he is in this crazy joy-filled town. He will also have other moments when his old habits cause problems in the community.

Jesus loves us as we are, but loves us too much to let us remain that way.

6. Salvation from the presence of sin: GLORIFICATION

This is the point at which we completely leave the Grinch behind, as we also will leave our temporal bodies behind. This is the part where we get to “go to heaven to be with Jesus” and live with Him in glory.

The Gospel is not just about the initial point of salvation, bringing us to a place of salvation from our sins so that we can be glorified with Christ. We have also been regenerated and adopted, and are currently being sanctified.

We have been saved, we are being saved, and we will be saved, all at the same moment.

For those who like a more serious visual, here is a fabulous one from the same book.

In summary, the gospel of saving grace in Jesus Christ is an instrument that not only brings life to people who are dead in their sins, but also renews life where believers have faltered…the gospel is sin-conquering, sin-canceling, and life-transforming.

And the way to access this incredible life-saving gospel is simply by trusting this to be true. We are saved through faith. Have you made this choice in your life? He has called you. You need simply to believe, and you will be given a new heart, a new family, and a new future. My prayer is that if you haven’t yet been saved by faith, that today would mark the point of no return. Our glorious King waits for you with open arms!

Grace be with you,

P.S. Want my printable resources for sharing the Gospel with your kids? Click here.