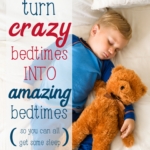 Welcome back to The Power of Simple Habits!

In the first lesson I taught about how habits are stored in our brains, as well as the three parts of a habit: the cue, the routine, and the reward.

Even though habits are usually formed automatically by a brain trying to save space, we can intentionally create new habits, and we can change old habits.

In the previous lesson I taught the brain science behind creating a brand new habit. So now let’s talk about how to change a habit.

For example, let’s talk about bedtime.

What is your family’s bedtime routine?

Some people have awesome bedtime routines, but for a lot of families, bedtime is frustrating. Everyone’s tired and cranky, and kids know how to push mom and dad’s buttons. Parents want to just chuck their kids and shut the door but kids want to get 18 more cups of water, go to the bathroom, and read another shelf-full of books. ??

Bedtime can be so hard, and just like with anything else, we unintentionally create habit loops in our brains and in our kids’ brains. We develop a lot of unhelpful habits when we just let the habits form on their own.

But that doesn’t mean we’re stuck with them. We can change habits. In the psychology world, this is called “habit reversal therapy”.

The book that helped me understand habits:

The golden rule of habit reversal therapy is that we don’t change the whole habit: we insert a new routine into the middle of the habit.

Because habit loops are so powerful, we don’t want to try to mess with the cue and the reward. But we CAN change the routine in the middle so we start with the same cue, and get the same reward.

So the cue for bedtime routines is usually someone saying “it’s time to get ready for bed!”

Then, a routine unfolds. Sometimes that routine was consciously created by the parent, and sometimes it just has evolved over a few years.

The reward is that everyone is in bed. How long that takes differs between families.

THE GOLDEN RULE OF HABIT CHANGE:

To change our bedtime habits, we don’t change the cue or the reward. We start the habit the same way we always do. In this example, we say, “it’s time to get ready for bed!” And we get to the same reward: everyone being in bed and going to sleep.

What changes? The routine in the middle. This is the golden rule of habit change – that we don’t change the outer parts of the habit, we just change the middle.

You get the drift.

This kind of routine will eventually end up with the kid in bed and going to sleep, but it might take hours. And it leaves you, the parent, feeling enormously frustrated and exhausted.

But you can change that. I’m going to suggest a routine that you can use, but you can always make your own.

2) Read a devotional book or a few Bible verses.

5) Pray a Biblical blessing over the child.

REWARD: Child is in bed and goes to sleep, and the parent is happy. Hurrah!

>> Need more tips to help your kids sleep? Check out these 5 bedtime solutions!

THE KEY TO HABIT CHANGE:

Now, the key to inserting a new routine into your habit loop is PRACTICE.

It will feel weird at first because both your brain and your child’s brain is used to the old routine. Your kids will freak out. They will call you.

But the benefits to teaching your brain and your child this new routine is that your child is in bed and goes to sleep, and you are still in love with your child instead of super frustrated.

You’ve created a competing response to the old routine, that, with practice, will eventually modify that habit file in your brain until it completely overwrites the old habit loop.

You will end up happier and your children will reap the benefits of a loving, intentional Christian parent.

This routine creates a structure that allows to deeper faith conversations because you’re starting mini-conversations every night. AND it creates a culture of faith in your family, as well as  safety because children thrive on positive discipline and routines.

They might not like it at first because most kids hate change. ? But if you keep it up, their brains will file away this habit loop as well and come to expect it IF you are consistent in practicing the new routine.

THE KEY TO CHANGING A BAD HABIT IS…CONSISTENCY

??This is what my friend Sarah discovered. She was stuck because her oldest son refused to engage in anything to do with God. He would get angry with her for even bringing it up. He had a habit of negativity toward anything of God. But as she stuck with her modified habits, HIS habits changed. Now, he’s listening as she reads the Bible and making his own connections to his daily life.

This, my friend is the power of habit combined with the power of God. We are in partnership with him in the raising of our kids. We can be confident that he is drawing them near, but still have a calling to create structures and cultures of faith in our homes.

To recap, the key to creating a new bedtime habit is to use the same cue and reward, but insert a new, intentional routine, then to practice that routine until your brain has completely rewritten the entire habit.

I’ve created a little worksheet to help you work this through and create a new bedtime routine. Download it and sketch out your cue, your new routine, and the reward. Then tell me about it!

You’ll notice that in my bedtime routine, there is a section for “praying biblical blessings over your child”. That 15 second habit is a KEYSTONE HABIT that creates widespread changes in your family. It spills over and makes other good habits easier. More on that in the next lesson!