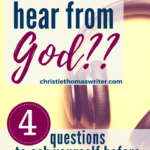 Have you ever heard God speaking to you?

Maybe you can answer this question. Maybe not.

But there’s another question we have to answer first: how does God speak?

The traditional Sunday School answer is that God speaks through the pages of the Bible, but the Bible itself is full of men and women who heard directly from God.

These people were guided by God in the complete absence of written words. If we truly believe the words in the Bible to be true, it stands to reason that God didn’t stop directly communicating with his people just because we now have the printed word.

[tweetthis]God didn’t stop directly communicating with his people just because we now have the printed word.[/tweetthis]

An infinite God can choose to speak however he wants.

I believe God still guides us personally through a variety of means, just as He did thousands of years ago. He does this through the work of the Holy Spirit.

Yes, He uses the Scriptures. But the Holy Spirit goes beyond the written word. He communicates with both us and our kids through whispers, visions, dreams, and impressions in our hearts.

But how can we know it’s truly God? How can I tell the difference between what’s God, and what’s me?

There is a list of 4 criteria that I use to help decide whether a message is from God, or just me. These can be used with adults and children, and I’ll give an example of each of them below.

4 QUESTIONS TO ASK TO DETERMINE IF IT’S GOD (OR NOT):

1) Is it in accordance with the character of God? (With a kid, I’d ask, ‘Does it ‘sound’ like something God would say?’) For example, we know God is love. If this prompting in your heart/vision/dream/word is not loving, it’s not God.

2) Does it remind you of something from the Bible?

3) Does it help someone or bring someone closer to Jesus?(Even if it’s yourself!)

4) Do other believers agree that this seems like something God would say? (For kids, this is usually mom and dad.)

Here’s how I used this in a very dramatic life situation I encountered:

I kept running across this woman on Facebook who needed a kidney. She had a son, and not getting a kidney meant she wouldn’t be able to parent him for much longer. It broke my heart, and I wondered if God was asking me to give her one of my kidneys. So I asked myself the 4 questions:

1) Is donating a kidney in accordance with the character of God?

Giving a kidney means giving up of oneself to save the life of another. I believe we see the ultimate example of that in the death of Jesus.

2) Does donating a kidney remind me of something from the Bible?

I had recently read the story of Esther, in which she was given a privileged position so that she could save her people. Mordecai asked her, “and who knows but that you have come to your royal position for such a time as this?” (Esther 4:14b).

For me, my position is as a healthy young(ish) woman. I’ve had 3 c-sections, so I had experience healing from abdominal surgery. I have a supportive husband, and amazing parents and in-laws who could help during the recovery period. I felt the Lord saying to me, “who knows but that you have come to your position for just such a time as this?” Around that time, I also heard a sermon on John the Baptist’s teaching about having two of something and giving one away to someone in need. So yes, it did remind me of many things in the Bible.

3) Does it help someone or bring someone closer to Jesus?

Donating a kidney would save a life, and had the possibility of bringing them (and me) closer to God.

4) Do other believers agree that this seems like something God would say?

I sought the advice of my husband, pastor, and a coworker that I admire, and they were in agreement that this could very well be something I was being asked to do.

(To read the rest of the donation story, go here.)

I have also felt a nudge to pick up a young girl hitching a ride in a parking lot, and it turned out my kids go to her school. I was able to encourage her on the ride to her house. That’s in addition to the many times I have felt a Holy Spirit nudge to make an apology, to ask an awkward question in a conversation, or to talk to someone on the fringes.

You won’t always be able to put every nudge through these 4 questions, but as you start to use them, you’ll start to recognize the difference between your own voice, and God’s voice.

I’m still learning to differentiate. Sometimes I feel the nudge and I think, “oh, what a crazy idea” and I don’t obey. I will never know what will have happened if I had obeyed, but I bet God had something in mind. My sinful self gets in the way far too often, but I bet that yours does too!

Those 4 questions will help you on the path to truly understanding if an idea, thought, vision, dream, or even (rarely for most people) audible word is from God!

This process can be used with children as well, and is a simple way to help them learn to truly follow God instead of just becoming moral people.

Here’s an example of how I used this with a child:

My son’s Sunday School teacher had asked each of them to pray about who to give a little bag of treats to. When he told me who he felt it was for, I was floored. The boy he had in mind had been a relentless pest for over two years at school. He knew how to push my son’s buttons, and he pushed every chance he got. But my boy felt like God wanted to give the bag to him, so the next day, with some fear and a lot of trembling, he thrust it into the boy’s hands and walked away. It sounded like an awkward encounter, but it was evidence of God working in his heart!

Later, I took him through the 4 questions to help him decide if this was from God.

Is it in the character of God to show unconditional love, to give undeserved gifts? Yes.

2) Does giving this small gift to a school enemy remind you of something from the Bible?

We talked about the time that David spared the life of his enemy, Saul, in the cave. Frankly, showing grace to an undeserving person is the whole basis of the gospel!

3) Does it help someone or bring someone closer to Jesus?

It definitely brought my son closer to Jesus. He told me that on Sunday night he was praying like crazy, and he knew that God would give him courage. This has bolstered his faith in a way that simply reading words never could. And in retrospect, it helped my son, because this boy completely stopped pestering him! We weren’t expecting that, but it was a nice bonus.

4) Do others believers agree that this seems like something God would say?

In this case, he talked about it with just me and my husband, and we thought it seemed like an excellent choice.

My boys have also felt the whisper of God’s love in their hearts, which is the most important word I feel they could EVER hear from God. If you’d like to read about getting silly kids to calm down and listen for God’s voice in their hearts, I wrote this article about it.

So there you have them: 4 questions to ask to figure out if God is speaking to you, or if it’s just your imagination! If it’s in accordance with the character of God, reminds you of something from the Bible, helps someone or brings someone closer to Jesus, and is verified by other believers, congratulations! You’ve just heard the voice of God.