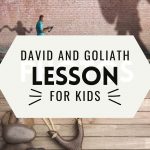 David and Goliath is an iconic Bible story for teaching to kids, with easily identified good guys and bad guys, a larger-than-life villain, impossible stakes, and a young hero.

Based on my experience in Children’s Ministry and as a Christian Children’s author, I’ve created this David and Goliath lesson for kids. You can pick and choose the elements that work best in your context, whether it’s in your family or church.

If you like these ideas, I should mention that most of them come from two of my books. Wise for Salvation is an interactive preschool devotional covering major stories from the entire Bible, and The Mother and Son Prayer Journal is a devotional that focuses on the life of David.

David and Goliath Story for Kids

Despite how many picture books you can find on the topic, the full David and Goliath story isn’t hugely kid-appropriate. There are some fairly nasty things shouted from the Philistine line, and each army is trying to murder each other. Also, David doesn’t actually kill Goliath with the stone – he merely knocks him out, then grabs Goliath’s sword and hacks off his head. Slightly gory, right?

You can find the entire episode in 1 Samuel 17, but if you’re wondering how to tell this important but bloodthirsty story to preschoolers, here’s the David and Goliath story in a nutshell for little ones:

There was a big bad army that had a big bad man named Goliath in it. This big bad man made fun of God and God’s people and tried to hurt them. David the shepherd boy decided that this needed to end. He picked up a stone, put it in his sling, then shipped the sling around and around above his head. When he let it go, the sling let loose an itty-bitty stone which flew into the giant’s big, mean, round head and knocked him down! With God’s help, even little people can defeat giants.

*This summary is found in my preschool devotional book called Wise For Salvation. Check out the book here.

Object lessons are a fun way to help kids visualize the point of a Bible story. Here’s a simple one you can use with kids:

? Find some small and soft objects, like cotton balls, socks, or small stuffed animals. Have children throw them at you to see if they can knock you down. Then ask: “Why do you think you couldn’t knock me down? How do you think David knocked down Goliath with such a small rock? Do you think he had help from someone?”

? This paper cup slingshot from Sunday School Games is a super fun game for kids of all ages!

? Draw a picture of David and Goliath together while talking about the story. SAY: I wonder how Goliath felt when he saw that stone coming toward his face?

? Practice memorizing the following verse while pretending to swing a sling. When you say “possible,” let the pretend sling fly! “With God, all things are possible.” (Matthew 19:26 NIV)

? Have kids draw a picture or create a comic of a time they needed God’s help (or might need God’s help in the future). In their picture or comic, have them depict how they think God helped them.

? David opted not to wear armor when he faced Goliath. Instead, he trusted God to fight for him and keep him safe. Have kids make a list of the things or people that keep them safe. Then pray, “God, please help me to trust you to care for me, no matter what happens.”

Want more David-focused prayer ideas to use with your David and Goliath lesson for kids? Check out “5 Powerful Bible Verses To Pray For Your Son”.

Ask the kids: Tell me about a time you desperately needed help.

When Goliath challenged the Israelites to single combat, King Saul trembled in his boots. As the king, he should have been the one to go fight Goliath. But he trusted only in himself, and he knew he couldn’t win against Goliath.

David, however, knew this wasn’t his fight. It was God’s fight.

You see, ancient people believed that battles were decided by their gods. In the age-old Greek story about the Trojan War, the author shows the Greek gods taking sides. Even though it was the humans who were fighting, the story talks about gods and goddesses manipulating people to make the battle go the way they wanted.

David knew he had the only real, living God on his side. He knew God had helped him before and would help him again.

Then David said to the Philistine, “You come to me with a sword and with a spear and with a javelin, but I come to you in the name of the Lord of hosts, the God of the armies of Israel, whom you have defied. This day the Lord will deliver you into my hand, and I will strike you down and cut off your head. And I will give the dead bodies of the host of the Philistines this day to the birds of the air and to the wild beasts of the earth, that all the earth may know that there is a God in Israel, and that all this assembly may know that the Lord saves not with sword and spear. For the battle is the Lord’s, and he will give you into our hand.” (1 Samuel 17:45–47)

David knew the battle was the Lord’s and that he was just doing his part. So he approached the battle-hardened soldier with his staff, a few stones, and a sling. As Goliath moved in for the attack, David pushed a rock into his sling and began to swing it around. He ran toward the vicious, angry warrior and opened his sling to let the rock fly out.

And I think you probably know the end of the story. The rock knocked Goliath out, and David used Goliath’s own sword to cut off his head.

Who won the battle? David’s God: the living God. How’s that for a God worth chasing?

(This devotional is one of 52 devotions from my book, The Mother And Son Prayer Journal. For more devotions and prayer ideas on the life and writings of David, check out the book!