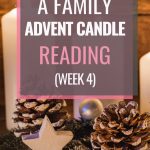 Imagine your kitchen table at Christmastime. Little voices giggle as little fingers flick off all the lights in the house. All that is left is darkness. And stillness.

As you light the first purple candle, SAY together:
God’s people waited for the promise to come true.

SAY: Last week we learned that God sent angels to Mary and Joseph, telling them about the baby that Mary was going to have. The baby named Jesus!

As you light the second purple candle, SAY together:
God’s promise came true through Jesus.

SAY: Last week we learned about some shepherds that had a pretty wild night! They met angels and babies, and told the whole town what they had seen.

As you light the pink candle, SAY together:
Shepherds visited Jesus: God’s promise made true.

SAY: It wasn’t only people that lived close by that got to meet the baby Jesus. There were some men that lived far, far, far away. They were men who studied the stars, and were called Magi. One day they discovered a new star in the sky. They knew that it meant a new king had been born, so they packed up for a long journey and went to find the baby king.

READ: After Jesus was born in Bethlehem in Judea, during the time of King Herod, Magi from the east came to Jerusalem and asked, “Where is the one who has been born king of the Jews? We saw his star when it rose and have come to worship him.”

After they had heard the king, they went on their way, and the star they had seen when it rose went ahead of them until it stopped over the place where the child was. When they saw the star, they were overjoyed. On coming to the house, they saw
the child with his mother Mary, and they bowed down and worshiped him. Then they opened their treasures and presented him with gifts of gold, frankincense and myrrh.

ASK: If you were a Magi, what gift would you bring to baby Jesus? (wait for answers)

As you light the last purple candle, SAY together:
Wise men searched for God’s promise, and found it in baby Jesus.

FINAL PRAYER: Thank you God that you allowed strangers from far away to meet baby Jesus. Thank you that you are still drawing in those who seem far from your love. Help us to always seek you and worship you. Amen.