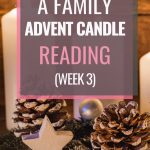 Imagine your kitchen table at Christmastime. Childish voices giggle as little fingers flick off all the lights in the house. All that is left is darkness. And stillness.

As you light the first purple candle, say together:
God’s people waited for the promise to come true.

SAY: Last week we learned that God sent angels to Mary and Joseph, telling them about the baby that Mary was going to have. The baby named Jesus!

As you light the second purple candle, SAY together:
God’s promise came true through Jesus.

“And there were shepherds living out in the fields nearby, keeping watch over their flocks at night. An angel of the Lord appeared to them, and the glory of the Lord shone around them, and they were terrified. But the angel said to them, “Do not be afraid. I bring you good news that will cause great joy for all the people. Today in the town of David a Saviour has been born to you; he is the Messiah, the Lord. This will be a sign to you: You will find a baby wrapped in cloths and lying in a manger.”
“Suddenly a great company of the heavenly host appeared with the angel, praising God and saying,
“Glory to God in the highest heaven, and on earth peace to those on whom his favour rests.” Luke 2:8-14 (NIV)

SAY: Let’s close our eyes and rest for a minute. How would you feel if suddenly a bright and shiny angel popped into this room and started talking to us? Let’s pretend that we are angels and sing a song together!

Sing “Angels We Have Heard on High”.
(in case you are wondering, “in excelsis Deo” means “Glory to God on high”)
Fun kids version available here

SAY: Let’s find out what the shepherds did after hearing from the angels!

“When the angels had left them and gone into heaven, the shepherds said to one another, ‘Let’s go to Bethlehem and see this thing that has happened, which the Lord has told us about.’
“So they hurried off and found Mary and Joseph, and the baby, who was lying in the manger. When they had seen him, they spread the word concerning what had been told them about this child, and all who heard it were amazed at what the shepherds said to them. But Mary treasured up all these things and pondered them in her heart. The shepherds returned, glorifying and praising God for all the things they had heard and seen, which were just as they had been told.” Luke 2:15-20 (NIV)

As you light the pink candle, SAY together:
Shepherds visited Jesus, God’s promise made true.

If you have any candy canes in the house, grab one now. If you don’t, you can draw one, or just have your children imagine one.

SAY: The candy cane is in the shape of a shepherd staff. A shepherd uses his staff to take care of sheep. When we see candy canes this Christmas, let’s remember that the shepherds were the first people to visit baby Jesus! And guess what? If you turn a candy cane upside down, it looks like a letter. Do you know which one? A “J”! And “J” is for Jesus.

FINAL PRAYER: Thank you Jesus for being born to be our Saviour. Thank you for letting shepherds be the first to meet you. Help us to meet you too this Christmas. Amen.