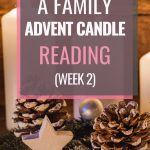 Imagine your kitchen table at Christmastime. Noisy voices hush as small fingers flick off all the lights in the house. All that is left is darkness. And stillness.

As you light one of the purple candles, SAY together:

God’s people waited for the promise to come true.

SAY: Finally, it was time for the promise to come true. God was ready to send the baby Saviour into the world, but he wanted to make sure the baby was going to have the right mother! He chose Mary.

“God sent the angel Gabriel to Nazareth, a town in Galilee, to a [young woman] pledged to be married to a man named Joseph, a descendant of David. The [young woman’s] name was Mary. The angel went to her and said, “Greetings, you who are highly favoured! The Lord is with you.”

“Mary was greatly troubled at his words and wondered what kind of greeting this might be. But the angel said to her, “Do not be afraid, Mary; you have found favour with God. You will conceive and give birth to a son, and you are to call him Jesus. He will be great and will be called the Son of the Most High. The Lord God will give him the throne of his father David, and he will reign over Jacob’s descendants forever; his kingdom will never end.”

SAY: Mary was supposed to get married to Joseph, but when he found out she was going to have a baby, he decided he didn’t want to marry her anymore. So God sent another angel to Joseph.

“An angel of the Lord appeared to him in a dream and said, “Joseph son of David, do not be afraid to take Mary home as your wife, because what is conceived in her is from the Holy Spirit. She will give birth to a son, and you are to give him the name Jesus, because he will save his people from their sins.”

SAY: The angel had to tell both Mary and Joseph not to be afraid. What are you afraid of? (take time to pray with your children)

SAY: God had figured out who was going to be the mother and the father of the Saviour, but they still had to get to Bethlehem. So he gave the king an idea to count all his people. Everyone had to go to the town where they were born to be counted. Where were you born?

SAY: Joseph and Mary had to take a journey all the way to Bethlehem, because that’s where Joseph was born.

“While they were there, the time came for the baby to be born, and she gave birth to her firstborn, a son. She wrapped him in cloths and placed him in a manger, because there was no room for them in the inn.”
(Luke 2:6, 7 NIV)

As you light the second purple candle, SAY together:

Sing or listen to “Away in a Manger“.

FINAL PRAYER: Thank you God for sending Jesus to be born. Thank you for setting him up with the best parents and for keeping the promises you made so long ago to have him born in Bethlehem. Help us to know you better this Christmas. Amen.