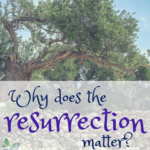 We talk a lot about Jesus being the substitute for us when he died on the cross, but why does the resurrection matter?

When I was a child, I read a story about a boy who, through his own greed, became a dragon. He was a horrid, self-centred child, and becoming a dragon basically showed the world exactly what he was like on the inside.

But as a dragon, he began to experience kindness, friendship, and love in a new way. His heart started to change.

One night, he was awoken by a great lion who brought him to a pool of healing water. The boy wanted to slip in and receive relief from his dragon body. He scratched at the itchy scales, and he was surprised to find that they peeled off. Delighted, he stepped out of his old skin.

But he was still a dragon.

He scratched at himself again, digging a little deeper this time. Again, he breathed a sigh of relief as he stepped out of the skin.

But he was still a dragon.

Again, he peeled himself, frantic to finally shed the body that wasn’t his true self. But it still didn’t work. He was trapped.

He couldn’t change himself.

After many tries, the lion stepped forward. He offered to help the boy shed his dragon skin. Finally at the end of himself, the boy agreed.

One razor-sharp claw flashed in the moonlight, then dug deep into the boy. He cried out in agony. The claw pushed deeper, then it was gone. The boy slid into the healing water, and was overjoyed to find himself in his true form.

The old had gone, the new had come.

(You may recognize this story as adapted from the story of Eustace in “The Voyage of the Dawn Treader“, by C.S. Lewis)

“You were taught, with regard to your former way of life, to put off your old self, which is being corrupted by its deceitful desires; to be made new in the attitude of your minds; and to put on the new self, created to be like God in true righteousness and holiness.”

Like the boy, we cannot put off the old self on our own: we need the death of Jesus to pave the way. But we also cannot put on the new self without him, and for that, we need the resurrection.

Because Christ died AND was resurrected, sin and death are defeated.

“And if Christ has not been raised, your faith is futile; you are still in your sins.”(1 Corinthians 15:17)

Because of Christ’s death AND resurrection, you have the power to live as your new self.

Who is that new self? It’s the true you, the one God created to be like Him in true righteousness and holiness.

“For we know that our old self was crucified with him so that the body ruled by sin might be done away with, that we should no longer be slaves to sin because anyone who has died has been set free from sin. Now if we died with Christ, we believe that we will also live with him.”Romans 6:6-8

What does this mean for me, as a mom?

So today, I will rejoice in the resurrection. Christ is not imaginary, or a myth or dead.

He is alive, and He lives in me, helping me live in true righteousness and holiness.

How about you? How does Jesus’ resurrection make a real-life difference for you?

If it doesn’t, please don’t feel ashamed. Sometimes it takes us years to find true freedom in Christ. But it’s there, and I’ll be praying for you to find it.

And if you’re looking for ways to explain this complex idea to your children, read this article on explaining the resurrection to kids, or  click here for my free discussion guide!

(Thanks Jeremy Camp for that powerful reminder!)